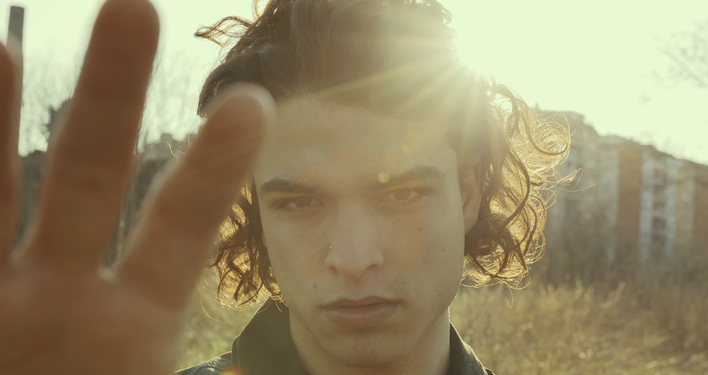 Leo Gassmann was born in Rome on November 22nd, 1998, in a family of artists with a demanding surname. At the age of 9, he entered the Academy of Santa Cecilia and studied classical guitar and solfège for 5 years. After completing his classical studies, he decided for a change and started studying singing, which he deepened with lessons in order to continue with the intention of improving himself and his music. At the age of 14, Leo wins an interpreter competition organized by Marco Rinalduzzi, guitarist, composer, arranger and producer who is well known in the Italian music scene. At 19, he was selected to be one of the twelve competitors of X Factor 12 reaching the semifinals and showing a singular talent in writing and voice. During his journey within the program, Leo had the opportunity to rewrite an unpublished piece by Lewis Capaldi in Italian, entitled "Piume", earning a great audience response. After having published two other songs entitled "Cosa sarà di noi?" and "Dimmi dove sei", Leo records "Vai bene così", a song that leads him to the finals of Sanremo Giovani 2019, confirming both his skills as a pop singer-songwriter linked to an all-Italian sensitivity with typical Anglo-American veins and sounds, and a great maturity and intensity of interpretation despite his very young age. His passion for music does not distract him from his studies and Leo is presently attending Communication Sciences at John Cabot University in Rome.

Leo Gassmann “Vai bene così”.
The lyrics in the song "Vai bene così" invites you to accept your failures. The young songwriter wrote it after experiencing a series of disappointments."Inside, there is everything I would have liked to have heard in those moments. We must learn that real defeat is not to fall, to apologize and start again, but the obsession with victory ".
This passage speaks of the need to accept oneself for who one is and the fact that making mistakes is human but one must never give up even when the world around you seems to collapse.
Only in this way can people, who have lost their hopes, fill the void that prevents them from appreciating everything beautiful that life can offer.
"Vai bene così" ends with the word "asimbonanga", a Zulu expression that means "we haven't seen it", and which gives the title to a song by Johnny Clegg dedicated to Nelson Mandela, symbol of the struggle for freedom and acceptance of the different.
The song is part of "STRIKE", Leo Gassmann's debut album which was released on February 7th, 2020.
“An album that marks the beginning of my journey on the pentagram of my musical career.
An album that introduces me to large and small audiences.
An album where most of the sounds that have always characterized my existence are presented.
An album that aims to enter, take root and then unite people's hearts.
An album that tries to merge my existence with those that I have encountered in my path.
An album that does not need many presentations because it tries to be sincere and simple.
My name is Leo, and this is "Strike", my first album. Rock On. "