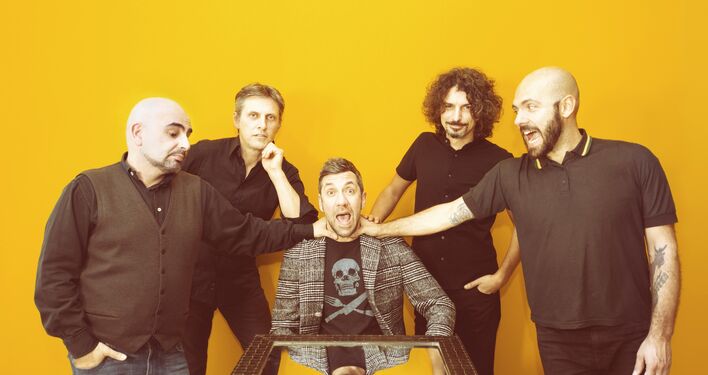 Formed in Genoa sometime between the end of 1997 and the beginning of 1998 – Meganoidi tentatively take their first steps onto the Genoese music scene, playing local social centres. There fans get to enjoy, and be part their first ever live performance, including the debut of their first EP: “Supereroi VS Municipale”. The ‘take away’ from that evening, albeit at a very embryonic stage, was a glimpse of the hallmarks that the band still stand so firmly by; self- production and artistic self -determination. A good sense of their own artistic style and licence! That demo sold out, and the revenue generated, allowed Meganoidi to intensify their live performances. They had the privilege, during that time, of sharing a stage with some very important and well-known names in music, both on a National and International level.

The group’s first self- produced album “Into the Darkness, Into the Moda” came on the scene in 2000, and was very well received by the music press. During that time, March of that year, while the first 10,000 copies were quickly selling out, the single “Megaonidi” is released, alongside their first self-produced video, directed by Lorenzo Vignolo. The next 4,000 re-issued copies sell out within a week and the accompanying video clip is on continuous rotation on various Italian television and radio networks. Their first live tour follows which will take them to various locations around the world, in the subsequent year and a half.

In September 2001, the song “Supereroi”, which later became one of the most popular and well known of the band, was produced together with a video clip. The live touring that followed culminated with invitations to participate in some of the most important national music festivals (including the Heineken Jammin’ Festival, The Independent Days Festival, and MTV Days) of that following summer.

By the autumn of 2002 Meganoidi had sold 50,000 copies, and it was during this time, that they started to work on a new album, recorded at Greenfog Studio. What came out of this collaboration was a strong sense of the musical influences that informed their early years. The result: a musical “Matrix” sound synonymous with “Meganoidi”! Stylistically they set themselves apart from what was popular on the Italian music scene at that time.

Their musical orientations were based on experimentation and continuous musical research of those initial influences and styles and while they differed greatly, the finished product is always irrefutably “Meganoidi”.

Their desire to Self-produce and their strides towards “artistic independence” are further developed during the production of the album “Outside the Loop Studpendo Sensation”. This time they enlisted the help of Vic Florentia (who was already working with Danko Jones and Tool) at Iguana Studios in Toronto.  They had Joe Lambert’s master the album at New York’s classis sound. The album went on sale for the set price of €13.00 as a sign of opposition to the major players and producers of the music industry at that time, and the unjustified continuous hike in the price of music (CDs).

“Outside the Loop Stupendo Sensation” is previewed in Genoa and accompanied by the single “For Those Who Lie Awake (Lets go!)”, the video to which, is made under the direction of Stefano Bozzetta. In the winter of 2003 the second single “Zeta Reticoli” was dropped. It became an overnight success and received wide acclaim. This increase in popularity boosted the album, thus establishing itself, over the year, as one of the most iconic of Meganoidi’s songs. Not only that, but some might claim, of the entire Independent Italian music scene. The accompanying video (directed again by Lorenzo Vignolo) was played on loop for 5 straight months on all major Television and Radio networks, and quickly became one of the most top 5 requested video clips of that year.

A new single is quickly followed, with a second video directed by Stefano Bozzetta, which proceeded the album release. When the album does drop, it is swiftly followed by 150 tour dates that reach all corners of Italy, North and South. The success of which, paves the way, for some International dates on their calendar. Between January and July 2004 Meganoidi represent Italy at the Euorsonic Festival, they headline a short Japanese tour, which cities include Tokyo, Osaka and Nagoya, they perform in the prestigious French festival “Nice Jazz Festival” where they were the supporting act at the opening of Peter Gabriel’s 2004 European tour!

In the autumn of 2004 the band regroup in the studio to work on a new album. They anticipate a potential release in early 2006. The idea of publishing an EP that anticipates that release date, takes shape. Thus, in May 2005 came “And Then We Met Impero” a concept EP that endeavoured to disrupt the sound formula of the previous albums: five tracks build on an articulated and layered song writing formula - eluding the classic patterns of the song form and instead pushing towards much more progressive drifts. The EP is proposed live during a short tour between May and July 2005.

In 2006, another new album entitled “Granvanoeli” is dropped which seeks to consolidate what they had started experimenting with musically and stylistically in the previous album, but with even greater vigour, and a more complex sound style. This was something they had never done in their musical history; song writing in their native tongue. Examples include singles like “Dai Pozzi” and “Un Approdo”. The latter, in fact, is accompanied by a video shot entirely in Genova, which was one of the first of its kind. It was made using a particular technique of sequencing more than 12000 shots taken with a high definition digital camera.

In 2009 Meganoidi celebrate 10 years on the music scene with a new musical venture “Al Posto Del Fuocco”. This album, which was written entirely in Italian, features new sound and rhythmic impulses. It was recorded by Mattia Cominotto (who left the band in 2006 to pursue a full time career in music production at his Green Fog Studios in Genoa) and mixed and mastered by Maurizio Giannotti of the New Mastering in Milan. The album is followed by a tour that takes the band around Italy once again, bringing them right up to the summer of 2011. In the winter of 2011 their fifth piece of work is released, “Welcome to Disagio” recorded and mixed by Mattia Comminotto, seasoned with colour, rifts and lyrics that convey a real sense of their achievement and wholeness as a band.

In 2014 Meganoidi take a brand new approach and decide to build on an idea proposed by Luca Guercio (the bands trumpeter/guitarist) producing a “Meganoidi in Concert” album and DVD.  Together with the help of 280 fans and the Music Raiser platform, where musicians and bands can launch their crowd funding campaigns and promote their music effectively, it retraces the entire musical career of the Genoese group, up to that point.

It was recorded and mixed by Nicola Sannino, with video footage and editing by Lucerna Films.  The executive producer was Tiziano Scali, the band’s live sound engineer. It is in HD and is still free to download from YouTube. On foot of this, the band go straight back to live touring, with a line-up of songs that catalogue the bands entire musical repertoire to date.  They travel all over Italy again, bringing them up to the autumn of 2017, when their 6thalbum “Delerio Experience” jumps into life!

They remain steadfast in their pursuit of an ‘authentic’ style, continually questioning their artistic path. With every new album brings with it a growing desire for more direct and disruptive sound to their songs and arrangements. Luca Guercio and Davide Di Muzio (singer) get together to write and collaborate on a project that marked such a departure for Meganoidi. The end result is entitled “Delerio Experience”!  Recorded and mixed by Nicola Sannino at the Tabasco Studio in Sori (GE), it is released on February 16th, which coincided with another very important milestone for Meganoidi, a celebration of 20 years in the music business!

After a two year tour around the boot of Italy, having consolidated their twenty-year relationship with their fan base, they enter the studio once again to work on approximately 20 new songs, written by Luca Guercio and Davide Di Muzio, during the summer of 2019.  By the autumn, they are ready to rock and there began the unveiling of o“Mescal”, a record of fresh and engaging tracks which explore the streets of funk. Recorded, mixed and mastered at the Tabasco Recording Studio in Sori with Nicola Sannino at the helm, now an integral part of Meganoidi’s production team. It was released March 6th2020.