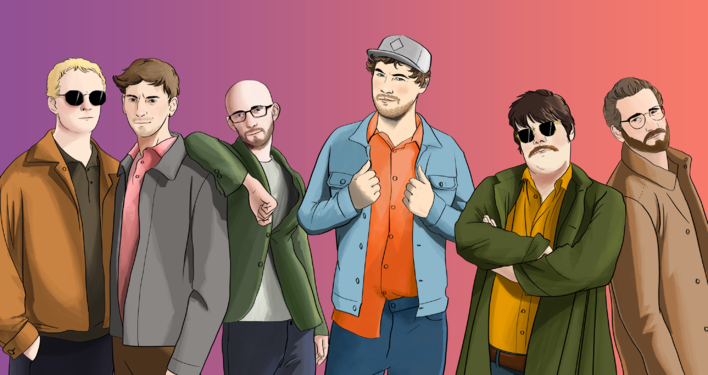 Pinguini Tattici Nucleari is a project that Riccardo Zanotti brings to life (born in 1994, voice, composer and author of all the lyrics), accompanied by Elio Biffi, Nicola Buttafuoco, Matteo Locati, Simone Pagani and Lorenzo Pasini. The first album, “The King is Naked”, was released in 2014, the year in which Riccardo moved to London to begin his studies at the University of Westminster, which he terminated in 2017 with a BA degree in Commercial Music (Hons). This change does not stop the band's journey and publishes the second album “Diamo un Calcio allo l'Aldilà” on the 18thof December 2015, while “Gioventù Brucata”, the third album, arrives on the 17thof April 2017. In August of the same year, PTN took part in the twenty-fifth edition of the Sziget Budapest Festival. 2019 marks an important year for the band: on April the 5th, 2019, the fourth album, “Fuori dall'Hype”, is released by Sony Music, directly reaching the 12th place in the FIMI / GFK music chart of best-selling albums, remaining in the top 50 for several months. “Fuori dall’Hype” is a success: in 2019 it exceeds 50 million streamings in total, while the songs “Irene” (from the Gioventù Brucata album) and “Verdura” conquer the Golden album one month from each other. The first spring tour in clubs starts with a sold out and the summer is none the less: the band reaches over sixty thousand participants in total. In the same year, PTN participate in the Faber Nostrum album, a tribute album to Fabrizio De André, with a reinterpretation of the song “Fiume Sand Creek.” In October, at the Lucca Comics & Games, Pinguini Tattici Nucleari are presented, a comic strip totally dedicated to the band published by Beccogiallo Publisher. This project was carried out by the most promising designers on the Italian scene and it quickly became a best seller on Amazon.it. In September, the band announces a tour in arenas, and tickets for the show at the Mediolanum Forum in Milan are sold out in 20 days. New shows have been added to the tour, which will start on February 27th from Pordenone, then  in Milan (February 29th), Padova (March 2nd), Florence (March 3rd), Rome (March 6th), Bologna (March 12th), Montichiari (March 14th), Torino (March 16th) and will close with a double show at the Mediolanum Forum in Milan on March 19th for one last big party. #Machilavrebbemaidetto! Who would’ve ever thought!