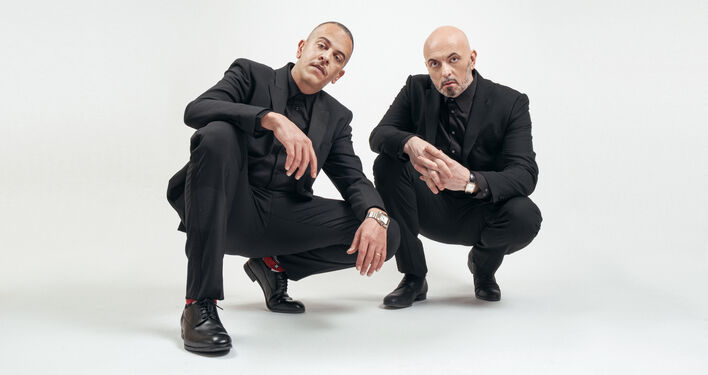 Always according to their rules. In an emerging  Italian hip hop scene that, in the early 90s, looked entirely exclusively to New York, Massimiliano Cellamaro (alias Tormento) and Massimiliano Dagani (alias Big Fish) from the very first steps of their careers, showed a rare personality in carrying  things out their own way. Infused with references to the sunnier, funk and melodic side of the West Coast (the stylistic and geographic other side of US hip hop), their debut album Soprattutto Sotto  (1994) released by independent Vox Pop – only hip hop concession for the label - symbol of the Italian alternative scene of the 90s - was at the time a surprise, an exception, a cheerful gesture of rupture that immediately puts them on the map of our home scene by special observers. Two years later, 1996, another turning point: Sotto Effetto stono suddenly transforms them from promises to unexpected masters of the game: stylistic and compositional maturity together with hugely successful singles (Tranquillo, Solo lei ha quel che voglio  and Dimmi di sbagliato che c’è  that sell over 200,000 copies each) and a charismatic and tireless presence on stages throughout Italy, transform them into the true sensation of the national rap scene, capable of bringing the flavors of urban music to the upper floors of Italian pop, of the most sophisticated r'n'b, going beyond the borders of the most canonical hip hop. Two other LPs follow (Sotto lo stesso effetto , 1999; …In teoria, 2001)  and other highly successful singles (such as Amor De Mi Vida, or Mai più featuring Shola Ama), but at the time, also a controversial participation in Sanremo with the track Mezze Verità which highlights the friendship and artistic affinity between Tormento and Big Fish.

The paths of the two separate (if not officially, surely in reality), offering as a legacy two anthologies, Vendesi—Best of Sottotono of 2003 and Le più belle canzoni dei Sottotono of 2007. Tormento breaks away from pop, undertaking a path of great credibility in the world of soul and more underground hip hop (with albums like Il mio diario from 2006, Rabbia from 2009 released by Yoshi Torenaga, Micro De Oro created together with the late MC Primo Brown in 2014);

Big Fish takes a step back from the spotlight, becoming one of the great protagonists behind the scenes of the explosion in the mainstream of urban and hip hop sounds in our country, which bring Italian rap back to the top of the charts (Fabri Fibra, but not only) or allowing himself free outings to X Factor (as producer and coach, alongside Manuel Agnelli) and with experimental solo projects pulling together dubstep, hip hop and indie (Niente di personale, 2013). Recently, however, the threads that have never been definitely untied are re-connected silently: Tormento and Big Fish gradually return to getting into contact.  The spark reignites.  The desire to return to play always according to their own rules—but with a lot more wisdom and a lot less of useless pressure—their profound, precious and special two-person experience is put back at the center of their life.  It’s still time for Sottotono.  2021:  “Mastroianni” is released on April 23rd, that anticipates the new album being released “Originali”, available on the 4th of June 2021.