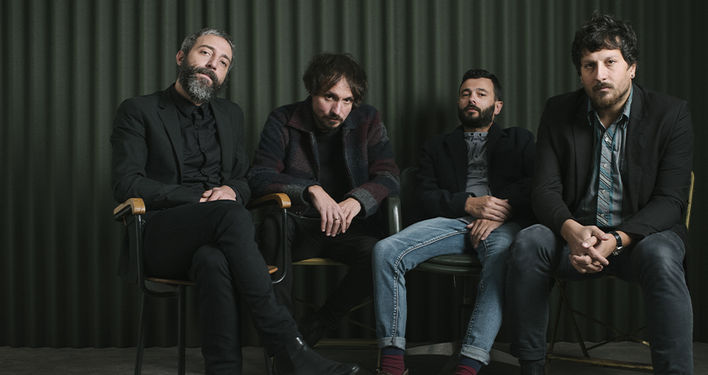 Sunday Morning was born in 1998, in Cesena. After an acclaimed debut and a long break, in 2015 they resume working on new songs, which later became their return album "Instant Lovers". In 2016, the Romagna band led by Andrea Cola and the new born label Bronson Recordings join their forces for the release of the third record "Let It Burn", followed by a tour with the talented American songwriter Micah P. Hinson. In 2018, the song "Lovers & Tramps" starts a new chapter for the band, which leads in April 2019 to the release of "Four", the perfect representation of an alt-rock journey that runs gently into the American flow.From the province of Cesena to the American(a) scene. Starting from the beating heart of the United States, from Louisiana, looking far away, to the West Coast.Recorded at the StoneBridge Recordings Studio owned by themselves and released on the 5th of April 2019 by Bronson Recordings, Four is the fourth album by Sunday Morning, with a four-line-up currently composed by main songwriter Andrea Cola (vocals, guitars, keyboards), Luca Galassi (guitars), Jacopo Casadei (bass, keyboards, vocals) and Francesco Guardigni (drums). Four is made of big open spaces and echoes from inner worlds, it’s the outcome of a journey that radically changed the songwriting and the sound of Sunday Morning. The new songs arise from a loud and clear need for a change, from the will to explore new paths. This new album is the soundtrack of a road trip among the great meadows of the Southwest, while you can hear behind you the Missisippi river, there where it all begins. The ten new songs are deeper, slower and straight to the core, while the sound is bigger than life, the acoustic guitars multiply enfolding their electric echoes, the piano finally steps out on the stage and the voice becomes the player. Various singles have already been extracted from the record, with related videos: If I Go, Power, Broken Arms and May Your Heart.

“I wrote the most part of the songs of the album while I was in New Orleans as an intern at the famous Esplanade Studios. Enter that world - having the opportunity to work with the legendary producer Daniel Lanois - gave me a new inspiration which had as a starting point the approach to the instrument. For the first time in my life I was exactly where I wanted to be, in the midst of this thick air that sticks to your arms and to this chair, under this porch. Everything I saw and experienced in these three months taught me that there’s no right nor wrong approach in making a record, there’s only a way that works and a way that doesn’t work. And the way that works has more to do with the right mood and the right people than with technique”. (Andrea Cola)

“Sunday morning brings the dawn in…”, to quote The Velvet Underground. And the dawn of Sunday Morning, that’s their foundation, arises in 1998. After some line-up changes, many live shows and the debut Take These Flowers To Your Sister (2005), in 2007 a long period of pause begins, interrupted in 2010 with the solo adventure of Andrea Cola with the album Blu. Several years later, the rebirth: Sunday Morning returned with the self-produced Instant Lovers, of 2015, and closely with Let It Burn, of 2016, to document their expressive urgency and inaugurate the partnership with the Ravenna label Bronson Recordings. In 2017 the band opens the Italian gigs of Micah P. Hinson.

Four pushes the band’s alt-rock even further, with elegance, absolute mastery of its own means and international credibility. With the feet firmly on the ground, tied to the roots, but the mind launched into the dream’s wild dimension. Among blues and indie folk influences, in the name of a traditional – or rather eternal – kind of composition that refers to Bruce Springsteen, Neil Young and Ryan Adams, as well as to names like Big Star and Black Crowes, up to the present of The War On Drugs. Four is Sunday Morning's great American novel and, as such, it does not need tricks and unnecessary frills, nor to follow the fashions of the moment. Using only the strength of the songwriting and the experiences lived in first person. Becoming "classics", even today, is possible.